Ford justified its ongoing shift away from sedans and hatchbacks by pointing out customers are far more interested in high-riding models. Surprisingly, even tuner Shelby has seen its sales mix move in the same direction.

While the firm doesn't release precise annual production figures, spokesman Jonathan Marsh told Autoblog it churns out about 300 new Mustang-based models each year, plus approximately 750 hot-rodded variants of the F-150. It outsources roughly 70% of its truck orders to a shop named Tuscany in Elkhart, Indiana. Shelby has grown recently, but it remains a small operation. "We can't keep up with the volume," Marsh said.

These figures don't include the late-model cars Shelby modifies each year, the vehicles built and sold in overseas markets, or the GT350 and the GT500 Ford makes under license in the same Flat Rock, Michigan, factory that manufactures the standard Mustang (and, for now, the Lincoln Continental). The roster of Mustang-based models Shelby builds in-house lists the GT, which packs up to 700 horsepower with an optional supercharger, and the Super Snake that roars out of its workshop with an 825-horsepower V8 engine, among others.

Shelby previously announced it will offer 250 units of the Super Snake Sport to enthusiasts in the United States and Canada, and they'll be able to configure it with a 770-horsepower V8 if they're willing to pay about $7,300 extra for a supercharger. We're betting fans of fast trucks will scoop up the entire production run quicker than a Super Snake sprints down a drag strip. And, above all, we're wondering if product planners in Dearborn are watching Shelby's truck sales balloon while wondering which drawer they're storing the Lightning nameplate in.

Carroll Shelby began experimenting with trucks during his Dodge-tuning days. His firm built a single 300-horsepower Ram-based prototype in 1983, and it stuffed a 175-horsepower V8 in 1,500 examples of the Dakota in 1989. The first Ford-badged model it worked on was the original F-150 Raptor, which it unveiled at the 2013 New York Auto Show. It originally planned to cap production at 100 units per model year, but an avalanche of orders convinced executives to raise that number to 500. Pickups began outselling Mustangs in 2015. 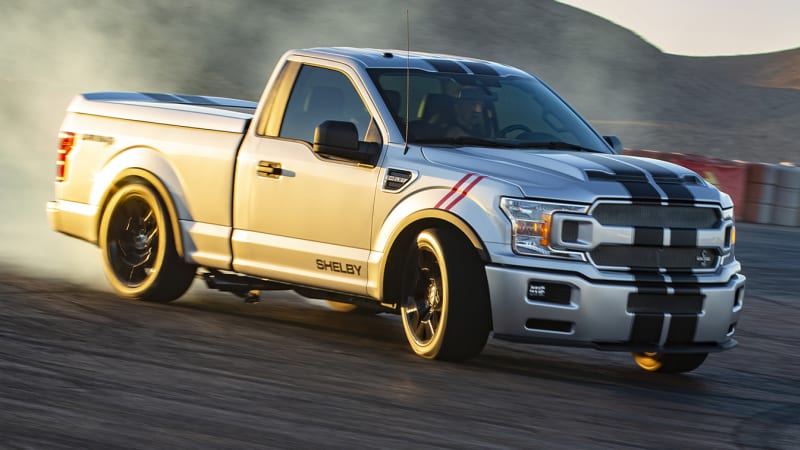 Shelby is known for its high-performance Mustangs, but the Las Vegas-based tuner told Autoblog it has sold more F-150s than muscle cars since 2015.

Joined Feb 1, 2017
·
449 Posts
Here's my pics from when I visited the Carroll Shelby Museum & Visitor's Center back in late November [last year]...

And what was currently in there custom-fab production floor....