The most potent non-V8 pony cars

Though cars like the Shelby GT500 and Camaro ZL1 1LE get the big headlines, both Ford and Chevy have more affordable performance offerings. The latest is the (deep breath) 2020 Ford Mustang EcoBoost High Performance Package. Like the previous EcoBoost Performance Package car, it gets upgraded suspension, limited-slip differential, tires and brakes, but now it also gets a version of the Ford Focus RS turbocharged 2.3-liter four-cylinder engine that now makes 330 horsepower and 350 pound-feet of torque. It can also be augmented with more aggressive suspension and tires with the Handling Package. Chevy, of course, is continuing to offer its 1LE track package for both its 2.0-liter turbocharged four-cylinder and naturally aspirated 3.6-liter V6, which come with suspension upgrades and additional cooling components for track work. We figured now was a good time to see how these cars stack up when it comes to the numbers. You can find all the specifications in the chart below, and further analysis after that.

Though the Mustang only features one engine, it has two available transmissions: a six-speed manual or a 10-speed automatic. The Camaro 1LE models are restricted to a six-speed manual transmission only. The Camaro Turbo 1LE does have a nifty feature that allows you to keep the throttle pinned while shifting for faster shifts with less lost boost between gears. Both the Ford and the Chevy models get a limited-slip differential, but the Ford has a shorter ratio with a 3.55 rear end, while the four-cylinder and V6 Camaros have a 3.27 rear diff.

With more power and a shorter rear-end ratio, it's no surprise that the Mustang is the acceleration king. With an automatic, it hits 60 mph in just 4.5 seconds, and with a manual, in 4.9 seconds. The V6 Camaro is next in line, reaching 60 mph in 5.2 seconds. The Camaro Turbo 1LE brings up the rear with a time of 5.5 seconds. As for fuel economy, the Mustang and the Camaro Turbo tie with an average fuel economy of 23 mpg. The V6 Camaro is thirstier with 20 mpg average.
Exterior and interior dimensions

From the outside, the Mustang and Camaro are very close, but the Mustang is larger by up to an inch in length, width and height. The Mustang is also significantly heavier than either Camaro. The V6 Camaro is lighter than the Mustang by 187 pounds, and the Camaro Turbo beats the Ford by 296 pounds.

Inside, the Camaro has more front headroom, but less front legroom. Those advantages flip for the rear seats, but really, no one should be forced to ride in those back seats. In our experience, we've found the Camaro to feel more claustrophobic with its high sills and low roof. The Mustang feels airy in comparison. The Mustang's 13.5 cubic foot trunk is much larger than the Camaro's diminutive 9.1 cubic foot trunk.
Pricing and features

The Mustang High Performance Package is reasonably priced when compared to the Camaro V6 1LE. The Ford starts at $32,670 with no options, which is only $180 more than the Chevy. The Camaro Turbo 1LE is the bargain, with a base price of $30,995, about $1,700 less than the Ford. The Ford gets pricey when adding the Handling Package, which brings the price to $36,755. The $1,995 package features magnetorheological suspension, thicker anti-roll bars, even wider tires and stiffer springs, but it also requires the addition of the $2,000 101A Equipment Package that has SYNC 3 infotainment and selectable drive modes.

It's worth noting once more exactly what comes in each of these performance packages from the get-go, too. In addition to the engine, the Mustang High Performance Package gets brakes from the Mustang GT including four-piston front calipers, a shock tower brace, retuned suspension and traction control. It also gets a unique grille, badging, stripes and rear spoiler. The Camaro 1LE comes with all the suspension components from the V8 Camaro SS, four-piston front brake calipers, wider tires, additional radiators and engine oil and differential coolers. On the outside, the 1LE gets satin black wheels, hood, mirrors and rear spoiler. One final note, the Camaro 1LE is only available as a coupe, whereas the Mustang EcoBoost Performance Package can be had as a convertible as well as the coupe. The Handling Package is not available on the convertible, though. 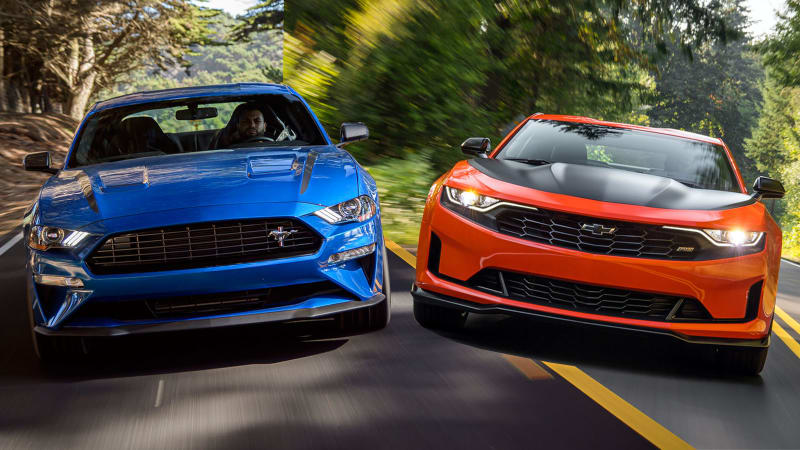 We compare the specifications of the 2020 Ford Mustang EcoBoost High Performance Package with the 2019 Chevy Camaro 1LE in four-cylinder and V6 versions.


2020 Ford Mustang EcoBoost High Performance Package Driven: It's Great
It gets an engine based on the old Focus RS's as well as tasty GT bits.

The latest four-cylinder pony car offers the heart of a Focus RS and transformative racetrack hardware.

The latest four-cylinder pony car offers the heart of a Focus RS and transformative racetrack hardware.