Alex Rae | Mar, 06 2018 | 0 Comments
With over 350 pre-orders, fans of the red-badged Civic rejoiced when the latest model launched. But almost six-months later the surge has ebbed and Honda’s flashy-if-not-plasticy Type R needs to stand on its own two feet as more than an offering for the already converted.

And it joins a growing segment with some immensely capable competition. The over $50k Type R faces established rivals such as the Ford Focus RS, Subaru WRX STi and Volkswagen Golf R, while the new Renault Megane RS arrives later in the year and South Korea’s inaugural hot hatch the Hyundai i30 N launches later this month.

But the Japanese maker is pitching its flash looking hot hatch as a more mature vehicle than ever, for those who appreciate things like calmer suspension and room in the back, with a nod to the traits that made the old model special.

Honda made a statement last year before the launch of its five-door weapon when it broke the front-wheel drive lap record on the torturous Nurburgring Nordschleife in Germany, sending a warning message to competitors - but more importantly a sign that the brand responsible for bygone performance had returned.

Powering the hatchback was a new four-cylinder turbocharged VTEC engine producing 228kW at 6500rpm and 400Nm from 2500-4500rpm, bringing for the first time a force-fed Type R powerplant to Australia with a high-revving 7300rpm ceiling.

But behind the flashy exterior bodywork and plastic spoilers is a more practical car that blends everyday liveability with performance, and answers contemporary safety expectations with Honda’s ‘Sensing’ suite of safety assists.

Don’t expect much relief from the exterior styling inside as there’s lots of bright red trim and stitching infused with black inserts and carbon-fibre look panels. The seats are influenced by previous Type Rs and have become so entrenched in the model’s history it’d seem faux pas to omit them.

They also offer a snug fit with some deep bolstering and firm shoulder support. The padding is comfortable and not as hard as previous seats that felt like they were plucked from the local auto shop. Seat adjustment is also very good, moving into almost any position needed for small and tall drivers alike, and the arm rests either side are neither too high or low – all big ticks towards practicality - but the seat still slings low for a sporty driver’s position and the steering wheel adjustment is just as good.

The star of the show is the nicely proportioned one-piece steel knob for the six-speed manual transmission. Positioned where the hand naturally falls, the solid hard metal ergonomics are a nice connection to the car’s mechanical package.

As a driver’s car the front is centred around the number one pew, but the other four seats offer just as much comfort and the rear seats are afforded enough leg room that it doesn’t feel cramped back there – kid seats are also an easy fit and a rear-facing baby seat won’t bother parents.

But the quality of some materials isn’t great and plastics in particular are less than stellar. Some touch points don’t click or move with precision such as the adaptive cruise and lane keeping assist buttons which flank steering wheel’s iconic red H. The infotainment screen is also a touch outdated in look and feel, however, it does offer the latest connectivity with Apple Carplay and Android Auto.

Put up against its rivals though and features like good seat adjustment are head and shoulders above the Focus RS, and while the interior is also better than the blue oval’s hot hatch the premium Golf R carries the baton for fit and finish.

The Type R is packed with a cohesive driveline that communicates to the driver through a quality steering wheel, pedals and gear knob.

The motor doesn’t scream like old VTEC engines because of a compromise in compression for the single-scroll turbocharger, but it does have the nature of one, surging harder when higher in the rev range and roaring into 7000 revolutions per minute before the short-throw manual eagerly jumps into the next gear. The quality of the transmission and clutch, including the automatic rev matching, are so fluid that it’s easy to find yourself changing gears more than required.

The turbocharged engine also results in a more economical claimed fuel consumption of 8.8L/100km; we hit 10.6L with mixed driving. There’s a small torque gap down low and the full 400Nm doesn’t come on until 2500rpm, but it’s not compromised for town driving and a gear or two out doesn’t demand shifting down to get going.

Rounding out its soft side is comfort settings for the adjustable suspension dampers, steering weight and throttle response. It tames the beast but without dulling it entirely, and the more forgiving suspension adds compliance the Type R never knew existed. Though the 245/30 wide tyres roar at higher speed on coarse roads and the thin profile is firm on bumpy surfaces they do complement the Type R’s dynamics when driving harder.

Default driving mode when pushing on the ignition is Sport, with +R mode a flick up the tree that has the sharpest settings applied. But Sport is a well-balanced blend of firmer suspension and increased steering weight with more finesse in throttle response. Honda claims 0-100km/h in 5.6 seconds which is quick enough, but it’s the dynamics of the Type R that really shine.

Tuck into a sweeping corner with some pace and the car doesn’t flinch, inviting more speed and confidence in tighter corners that hold up even when it’s a bit slippery. It holds steady on the nose and through a combination of the LSD and torque vectoring it’s hard to induce an ill tug through the steering or unease from the front. The rear follows through in tidy formation and isn’t as prone to playfully squirmig like all-wheel drive rivals, but is no less satisfying to drive.

The steering is sharp and rapid, with good feeling weight in Sport and more aggressive in +R, but it’s a touch detached from the road and filters out some feedback. The rest of the package is tack sharp, however, and the 350mm Brembo front brakes are progressive and predictable in bite.


SAFETY
ANCAP Rating: Not yet rated

Servicing: Service intervals occur every 12 months or 10,000km (whichever occurs first). The Type R is available with Honda Tailored Service Program at a capped price of $307 per service for a maximum of five years or 100,000km, whichever comes first.

The Ford Focus RS is competitive on price and brings all-wheel drive for the first time in its history. It equates to the fastest RS yet and a car that on paper beats the Type R, but the easy (and fun) to drive fast ability doesn’t feel better than Honda’s poise, and its interior and driver’s seat aren’t as good.

The Golf R is a more premium hot hatch inside with a comparatively subdued appearance outside and it’s also just as capable.

The Renault Megane RS doesn't arrive here until later this year but our first drive impressions overseas are that this front-wheel driven five-door might be the closest rival yet.


TMR VERDICT | OVERALL RATING: 4/5
Honda hasn’t robbed the Type R fan club with its practical twist on the cult car classic and beyond the plastic bodywork are plenty of nods to red-badged cars of the past. The driveline is a highlight and despite lacking the old VTEC rev-happy scream its pliable nature is easy to live with yet engaging to drive.

The practical arguments are now better than ever before, and should tickle the interest of buyers that might have been questioning if its intentions matched its looks.

Joined Feb 24, 2016
·
638 Posts
Are we allowed to reply to threads like this?
If yeah, I had the chance to drive one.
I was scouting a car in the family and before we settled on the Q3 (see sig for delivery) we looked at the normal civic.
The guy saw I pulled in with the RS and said if I am not interested swapping.
I told him it will be difficult to get me to sell my RS but if he has a Type R i could drive, I would love to try it.

The FK8 Typer R is different than the RS MK3.
There are notable differences.

1. Engine
2. Interior Overall
3. Pedal Feel (easier for me to HT with a pair of shoes which doesn't always work on my RS. This only happens on one pair of shoes)
4. Handling
5. Gearbox - Throw is a bit shorter than on my RS and the one I tried did not have the second gear Grind.
6. Wheels! Beautiful job on these. I love them.
7. Design - I love the front of the car. I find it beautiful.

1. Seats are not as nice as my RS Bucket Seats.
2. The noise. I thought it would be louder with 3 exhausts. Little did I know that the third one is mathematically added to improve certain things on the car.
3. I was a bit confused with the Dashboard. This is a personal preference of mine I am sure I will get used to it but I am old school. Give me two needles and I am golden.
4. Placement for reverse gear given that it has 6 gears.
5. Certain parts in the cabin felt there because everyone seems to be using that type of material and not because it was beautiful.

Would I buy one? Most definitely.
Would I have chosen the RS easily had I driven both? I am not sure.
A quick reminder, I bought the RS on a whim without even testing it.
Would I trade my RS for it, unlikely.
► Show Full Signature
WT – Competition IC | REVO Carbon CAI | Mountune RMM | Short Shift Arm
HJS 200 Cell Sportkat | Remus Cat-back | SS Black Chrome Tailpipes
Fischer-Hydraulik SS Brake Lines | Endless RF 650 Brake Fluid | Endless ME20 Pads F+R (squeak king)
Rotors: TSP XG150 – DBA 5000 T3 SLOT | DBA 4000 T3 SLOT | MR - KW Clubsport 2 way: on order (ETA March) 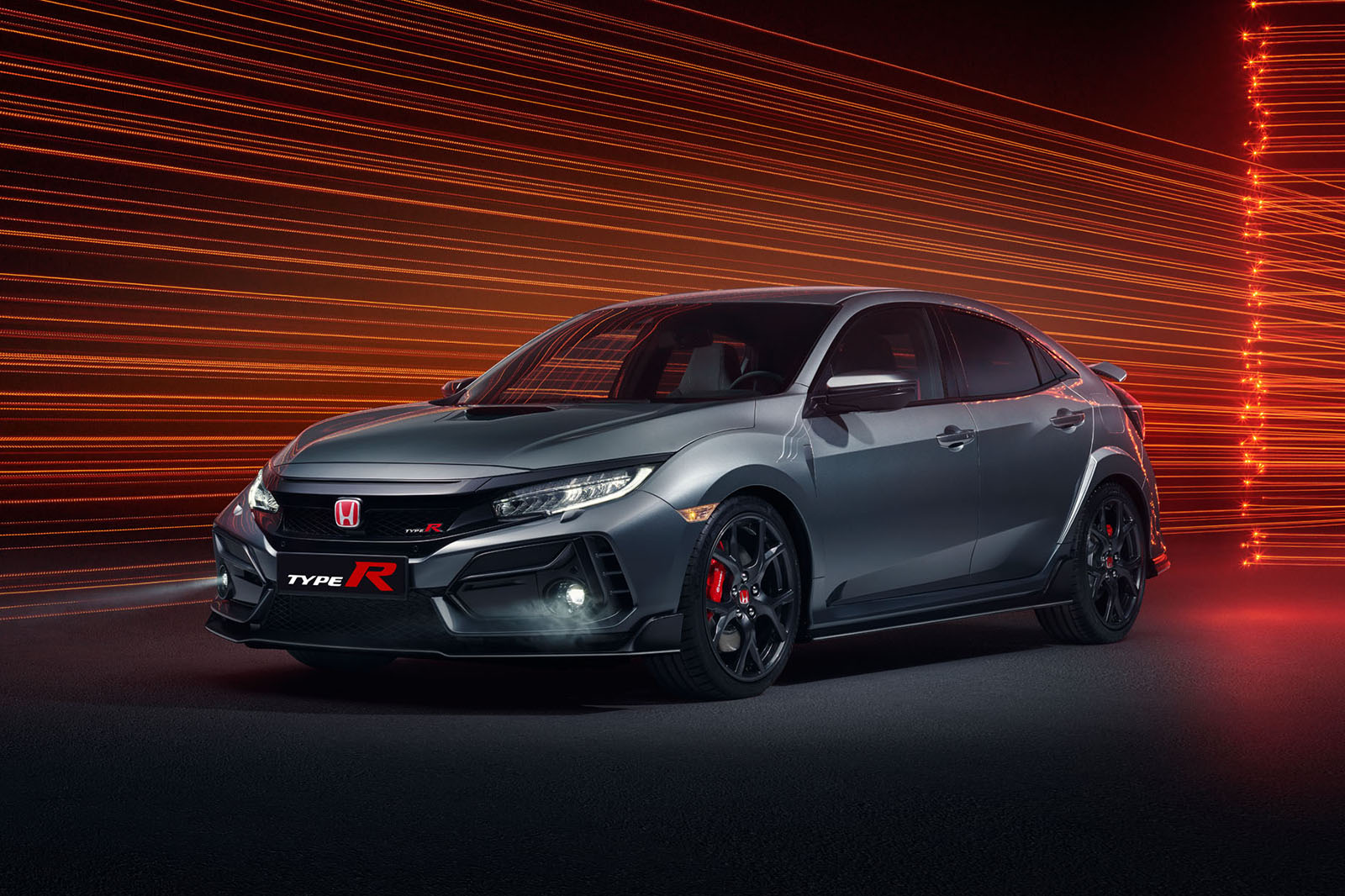 The 2021 Honda Civic Type R Limited Edition has been revealed—the 600 U.S. examples will shave weight and offer even sharper handling. 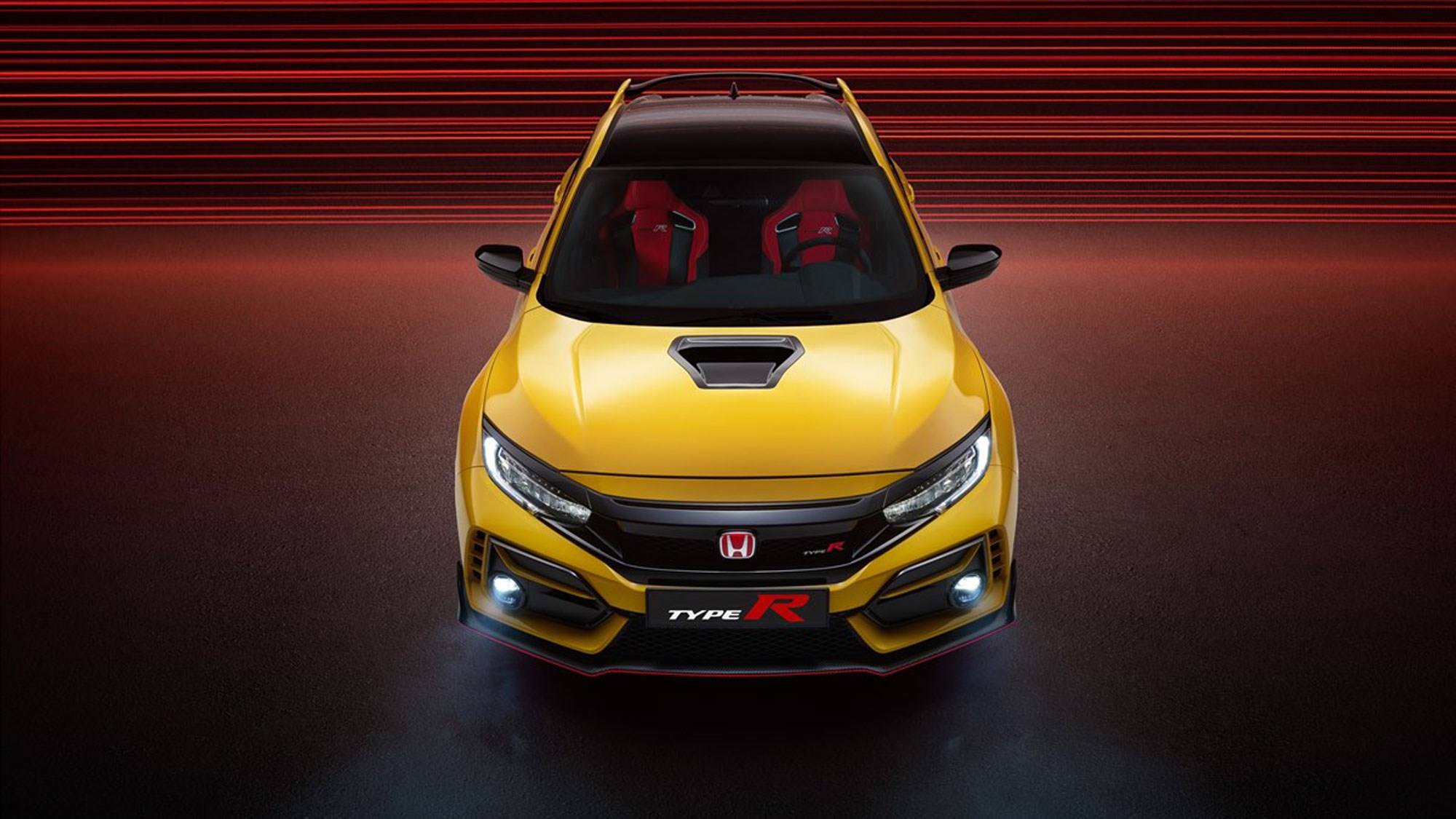 Joined Feb 25, 2018
·
455 Posts
Here's what bothers me about the CTR. I see maybe one a month. Now we have this new, subdued variant of the CTR we're not getting. How many CTRs being brought into the country? Why can STI get 5-15 STIs on each dealers lot throughout CO, but I can't seem to ever find a CTR. If it's so great, why aren't more people clamoring to buy it? There's 4 new CTRs for sale in greater Denver and 46 STIs. Is it because I live in CO and most 1-car people chose RSs, S3s, STIs, WRXs over the CTR because of AWD? Or is it that ugly?

I can't figure the CTR out. I would imagine that at $37K (there's really no options besides a $1200 carbon wing and $800 interior carbon trim), they would sell incredibly well in warmer states (Also no option for heated seats! Lame.).

Anyway. Can't wait to see how much over MSRP Honda dealers charge for the big bird. I love how capable the RS is in poor conditions.

The Type R track car of your fantasies is finally here.

Just a month after its reveal, all 20 UK allocations of the Honda Civic Type R Limited Edition have been accounted for 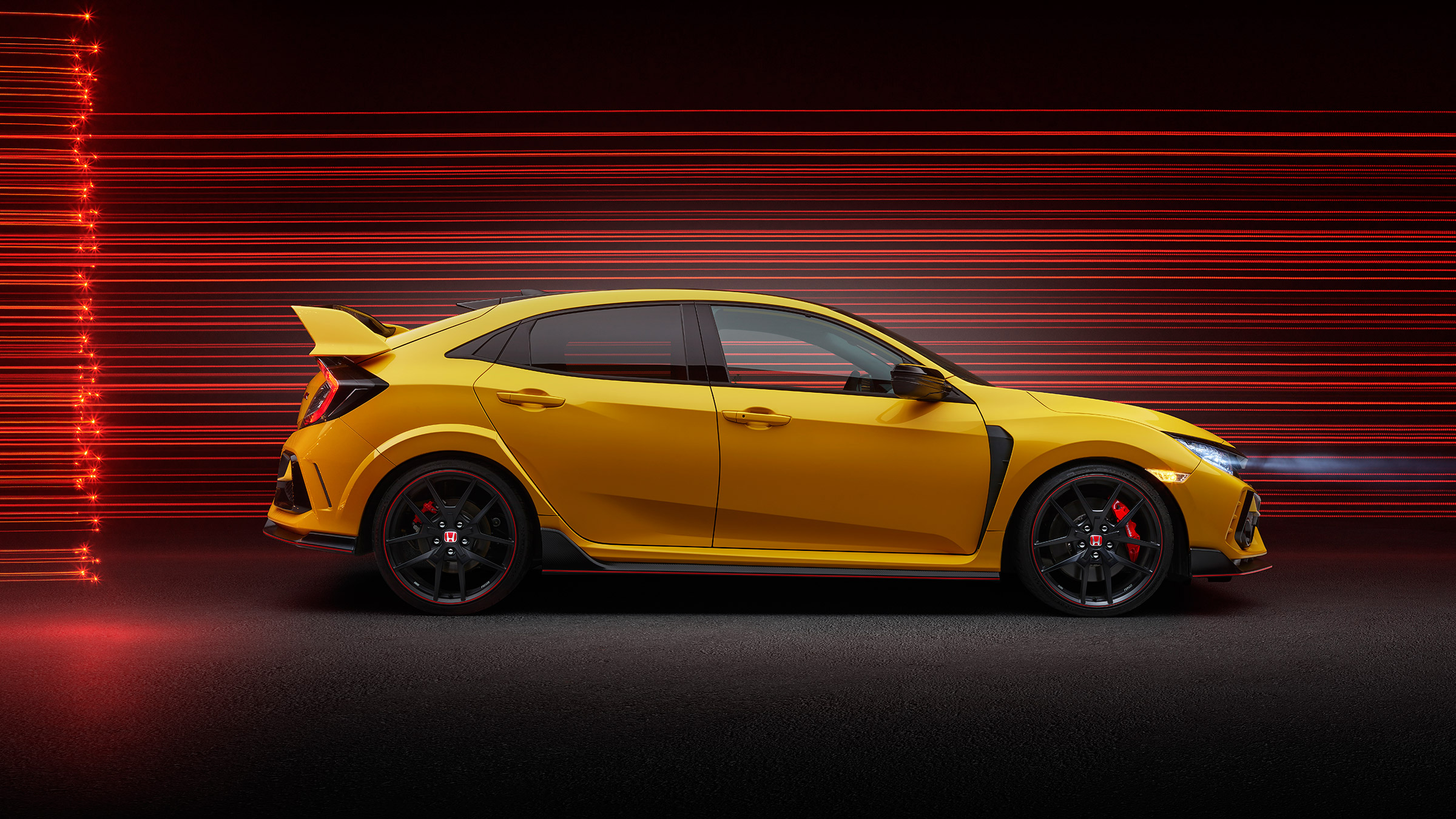